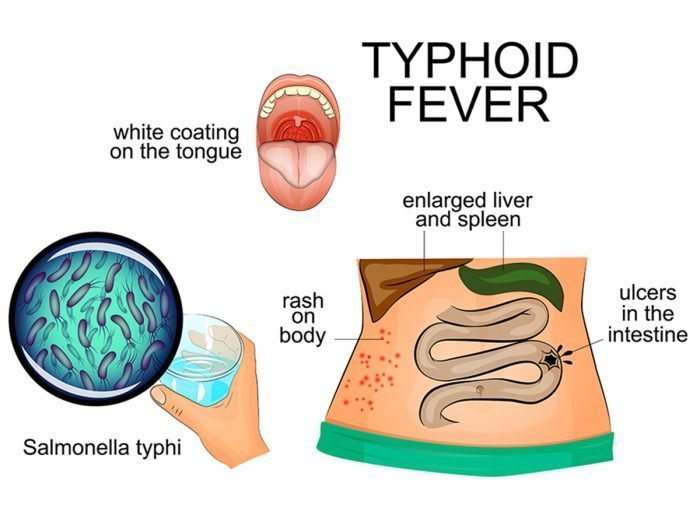 Typhus is a disease caused by infection with one or more rickettsial bacteria. Fleas, mites (chiggers), lice, or ticks transmit it when they bite you. Fleas, mites, lice, and ticks are types of invertebrate animals known as arthropods.

There are three different types of typhus:

This type is caused by Rickettsia prowazekii and carried by the body louse, and possibly by ticks as well. It can be found around the world, including in the United States, but is typically found in areas of high population and poor sanitation, where conditions promote lice infestation.

Alternatively known as murine typhus, this type is caused by Rickettsia-typhi and is carried by the rat flea or cat flea. This disease can be found worldwide. It may be found among people in close contact with rats. It isn’t commonly found in the United States, but cases have been reported in some areas, primarily Texas and southern California.

This type is caused by Orientia tsutsugamushi and carried by mites in their larval stage when they are chiggers. This type is more commonly found in Asia, Australia, Papua New Guinea, and the Pacific Islands. It’s also called tsutsugamushi disease.

How Bitter Leaf Can Help

There is like a common belief that bitter leafs is good for typhus (disease caused by bacterial infection in liver) patients. This the way you can take if you want to use bitter leaf for resolving this problem.

Bitter Leaf: Why you should take advantage of this herb

Jan 29, 2020 / By greg
Call Now Button
SIGN UP & GET 10% OFF
Subscribe to Natural Herbal Life.
Subscribe Now
Yes, send me updates and exclusive sales offer, events and more in accordance with our privacy policy
×
New subscribers will receive a code for 10% off.